Unmaking a Grotto with Kia Neill

Kia Neill's geodes have gone through several permutations from their installation into Cave at DiverseWorks in 2008 to a grander, more elaborate setting in Grotto at Lawndale Art Center in 2009 and then to their most recent home at Box 13. But as with Whitney Riley's installation My Weltanschauung, which inaugurated the space, Neill's Grotto had its time and it was now time to go.

Neill decided to get creative and turned the de-installation into an event. On Saturday, September 22, friends, fellow artists, and collectors dropped by from 1 to 4 p.m. to help "Break the Big Geode." I dropped by to provide moral support (a.k.a. take pictures and try not to get in the way) and a sneak a peek at the substructure of this installation. 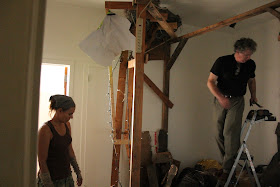 On average, Neill confessed that the geode piece took a week to install. It consisted of a wooden frame, hundreds of lights, and the canvas-foam-paper sections that made up the exterior of the cave walls. De-constructing the cave took her, Bill, Anton, and a few itinerant volunteers about half a day of cutting the cave sections from the scaffolding and then unscrewing the wooden frame. 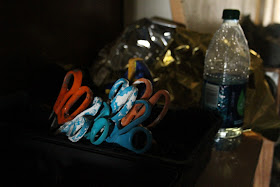 In this game of rock-paper-scissors, the scissors won.

Much like you'd expect to see at the Houston Museum of Natural Sciences, Neill set up a table of cave sections, smaller geodes, and pictures so that people of every price range could partake in the installation. 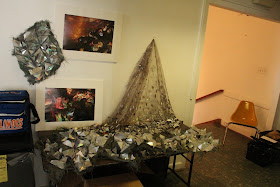 Geodes for sale, cooler not 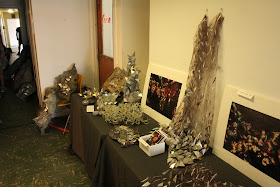 geodes and photos Most of the installation was re-purposed.

The cave sections, which ranged from 1-3 ft. wide and 1-3 ft. high, were sold. The wood framing was designated as fuel for a ceramic kiln. 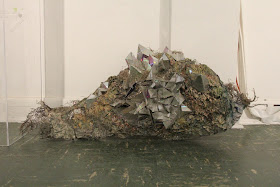 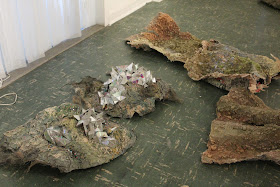 Sections of the cave, some glittery, some not

Neill didn't officially name a "best volunteer" of the event, but my vote goes to Bill. Not only was he a workhorse with the power tools, he also brought homemade chocolate chip cookies. The cookies were crucial for my experience of the event because you can really build up an appetite watching people work construction. 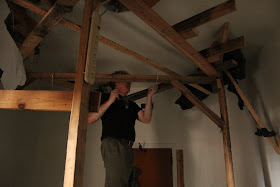 Anton gets honorable mention if only because he explained how to use a bike as a weapon of self-defense if someone tries to mug you while you're out cycling. 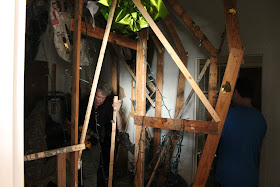 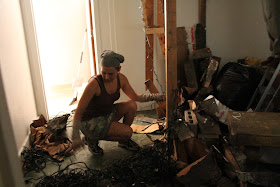 I thought the crystals were illuminated by magic. Turns out it was Christmas lights.

A lot of attention in the art world focuses on the end product. The term "Object d'art" isn't an accident. This event was enlightening because it invited non-artists to view and experience (if they were up for it) the physical labor (a.k.a. grunt work) that artist do everyday. I've been to a lot of closing parties, but never one where I got to break stuff, acquire a small piece of a very large installation, and eat homemade chocolate chip cookies while being serenaded by a power drill.

For me, it was a sweet, sparkly success.