Cardoza Fine Art has a show up called Wax featuring Bret Shirley, Lauren Moya Ford and Erin Joyce, but of all the three artists, only Shirley dealt with wax as a substance in his work. He employs wax in his pieces in a variety of ways, but what interests him most are the mutable qualities of wax. Wax is solid, but just barely. Heat just above room temperature will gradually deform it. But its softness doesn't prevent it from being simultaneously brittle. Shirley plays around with both its melty and brittle qualities in his work for this show. 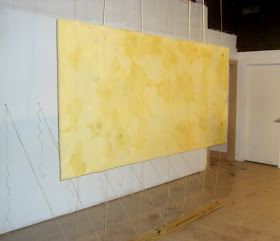 Study for Dromilly Ave. is designed to work with wax's brittle qualities. The piece has three parts. The wax part is a large rectangle of beeswax suspended in space by twine. The twine runs through the wax and is attached to the ceiling and the floor. Embedded into the back of the wax of a bunch of small audio speakers, making noises. 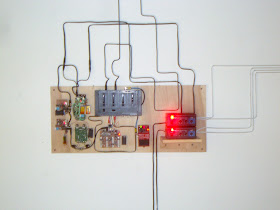 The second part is the electronic device that feeds the signal into the speakers. And the first part, the source of the signal, are two microphones hanging down into the gallery, picking up the ambient sounds of conversation.

The idea is that the speakers will eventually create enough sound to cause the wax to form fractures, tiny cracks that will grown into big cracks under the influence of continuous sonic assault (aided by gravity). Eventually the cracks will grow big enough that the wax rectangle will fall apart. Study for Dromilly Ave. is therefore an auto-destructing sculpture, like the grand-daddy of such works, Homage to New York by Jean Tinguely. Since the source of the vibrations that will destroy the sculpture are the two microphones in the gallery, it is the chattering of the viewers that will ultimately destroy Study for Dromilly Ave. If it works, that is. The name, Study for Dromilly Ave., suggests that this is something of an experiment. Maybe cracks will form, maybe they won't. It's a process piece with a goal which may or may not be reached. 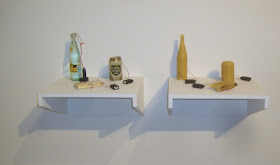 The Translational Remnants (Water, Tobacco and Beer) take advantage of wax's tendency to melt. On the left are three common objects of consumption--water, tobacco and beer, each attached to a transistor battery. On the right are wax objects that have been formed in the empty space inside a bottle of water, a package of tobacco and a can of beer. They are the negative space, similar to the sculptures of Rachel Whiteread. Each of these pieces of yellowy beeswax has wires going into them, attached to batteries.

Here the idea is that the wire inside the wax will generate heat, gradually melting the piece. They started as negative images of a thing, and will end up possibly as puddles. Or will they? Again the question is whether the process will lead to the autodestructive endpoint. As I understand it, inside each wax object, the wire is simply stripped of insulation. If there had been a resistor added, the interior heat would have been higher. I wonder if the heat will be enough to actually melt the wax. 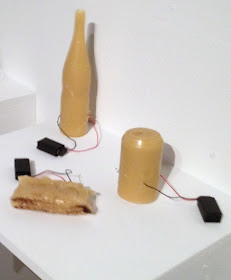 But the question about whether the process will complete itself is one of the appealing aspects of the work. They come across as school experiments, the kind of thing a clever kid might do for a science fair. There is something kind of joyful about this kind of desktop science.

But by gradually transforming a representation of the inside of each container, Shirley is creating an analog to what happens to the actual contents of each of these vessels. The water is drunk and become part of is. The beer is drunk and the alcohol metabolized by the liver. The tobacco burns, the smoke is inhaled and some of it enters the bloodstream. Water, beer and tobacco are transformed by our use of them. 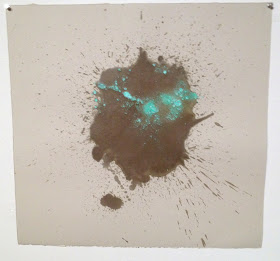 The other works in the show feel more traditional in the sense that they are pieces in the midst of an incomplete process. The beeswax and watercolor spatter paintings, however, sem to be the end of a process. Each one is named after a chord and a beat, and I wonder if those noises were used in making the pieces (perhaps vibrating the paper as the wax was poured?). 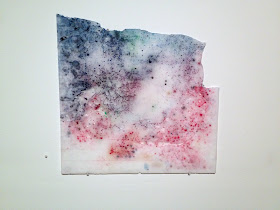 The two untitled wax pieces sit between painting and sculpture. The wax rectangle of Untitled (Red Cluster) has been broken (and unless handled very carefully, will break again) giving the top of the piece a jagged edge.

Shirley's experiments with sound, electricity and wax are quite fascinating, and with Study for Dromilly Ave. and the Translational Remnants, additional visits to the gallery are definitely called for to see the progress of the process.