Sometimes a car is just a car (Not!)

Debra Barrera's Kissing in Cars, Driving Alone at Moody Gallery is the sexiest show that I've seen so far this year.

Yet there are no full frontal nudes, no orgiastic tangle of limbs, no burnished cocks or plush pussies rendered in photo realist detail on a monumental scale. It's just automobiles: paraphernalia, drawings, parts.

Let me explain what I mean by "sexy" because it's both a powerful word and also a very personal one that tends toward ambiguity. In other words, your "sexy", my "sexy", and Mitt Romney's "sexy" might not match up. (Although magic underwear may be the garment that binds our "sexy" together.) For me, "Sexy" is mental. It's a state of mind. It's an approach and an attitude that focuses on the minutiae to the point of obsession. And I'm not just talking about the physical details. I'm also referring to the symbolic, the psychological, the political, the social, and the metaphysical details that compose and converge into an art work.

If the devil is in the details, my version of "sexy" is the devil's devil.

Barrera's approach to the automobile--how she handles it, how she represents it--makes me swoon. And partly because cars are the perfect metaphor for life in the U.S. As a symbol they represent freedom, sex, and death, making an emotional connection as well as serving as a signifier. For I suspect, regardless of where you misspent your youth, chances are that you either had your first sense of adult autonomy or had your first sexual experience or your first encounter with death in an automobile. Or all three.

Barrera leverages that symbolism in her sensual and reverential treatment of cars. It's most obvious in her photographs of the personal detritus that she salvaged from wrecks. She collected personal belongings left behind in wrecked cars and beautifully photographed them in a way in which each subject becomes an objects d'art and also a visual, narrative poem: a clutch of red balloons, a rusting tiara, a molding precious bible. The 8" x 10" frames each contain an entire life's story. They invite you to imagine them. 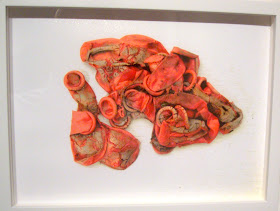 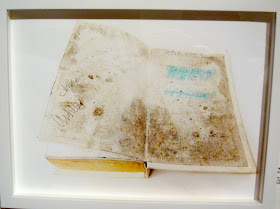 The sensuality comes through in her drawings of cars. The detailed graphite renderings of the cars reminds me of fellow Moody Gallery artist Michael Bise. The suspension of the subject and the drawings lack of mundane contextual details suspend the subject and elevate it to an ideal, similar to the drawings of Robert Pruitt. Where as his stark presentation of his subjects force you to confront his blend of ethnic and social and political symbols and stereotypes, Barrera's sports cars read as an erotic ideal. Each one is a petite mort, distilled from time and space, complete and unending within the confines of the frame as if within an evening of making love. The timelessness is evident in Circuit (Mont-Tremblant) in which the cars eternally race toward a non-existent finish line, accelerator to the floor, engines screaming. 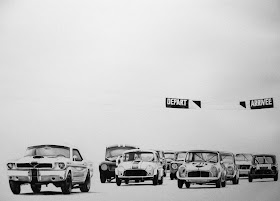 Two other pieces draw on the automobile's sex-death symbolism. In Skoda Favorit over Toroweap, a car has driven over a cliff and we are witnessing it moments before impact, wincing with anticipation of the power and pain on impact, a moment before completion, before climax. 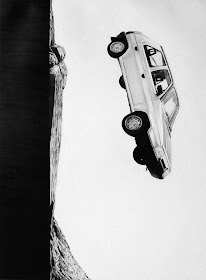 The other drawing features the Lamborgini that Grace Kelly drove at the 1967 Grand Prix in Monaco. The reference to the sex symbol Grace Kelly adds to the pieces sexual allure but it is Barrera's masterful rendering of the Lamborgini, the 20th century sex symbol equivalent of Michelanglo's David, that delivers it. The allusion to death is included in the reference to Grace Kelly, who suffered a stroke and drove her car over a cliff. Such a beautiful princess. Such a sexy car. Such a romantic death. 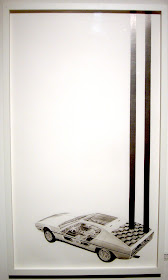 The third aspect of the show is the parts. Here too, Barrera consistently handles her chosen objects with the same sensuality, the same loving care that an automobile enthusiast would exhibit or a gear head would give. 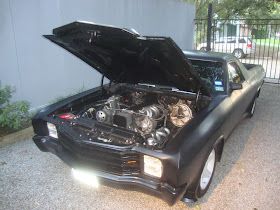 She does that with automotive enamel. In I'd rather have a Lamborghini than memories, Barerra lovingly lacquers a suitcase with the automotive equivalent of Yves Klein Blue. The piece's title is an acknowledgement of the instant gratification ethos of the American culture. The treatment of the piece of luggage is an extension ad absurdum of the concept. If you can't have the beautiful blue Lamborghini, then you can at least have its shiny metallic coat. 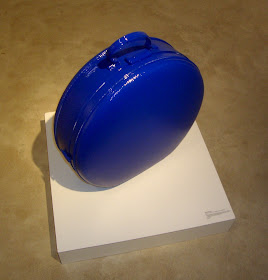 In her most playful piece, Someday Looks So Good Right Now, she sexes up death, automotive style. She tricks out a walker by painting it with sparkling automotive paint and chroming out the cross bars. Death may be inevitable but you can stagger with some swagger toward it in all your gear head glory. 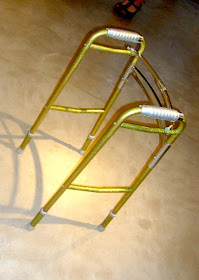 Of course these subjects: the automobile, sex, death, and freedom are openly available to her (and female artists the worldwide, except may be Saudi Arabia) because of the women that push the boundaries. Barrera pays homage to one of those women, Dorothy Leavitt, a pioneer in female motor racing and independence. 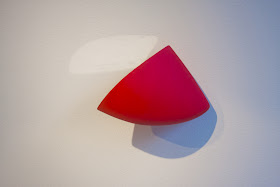 In an age of the Lilly Ledbetter Fair Pay Act and binders of women, I imagine Barrera is subtly, symbolically asserting two things: 1) women (and their equality) may be closer than they appear and 2) once women (at least women like herself and Dorothy) have passed men, they won't be needing rear view mirrors ever again.

I don't care what your sexual preference is, that kind of confidence is dead sexy.