Wrapped Up In Books with Seth Alverson and Lane Hagood 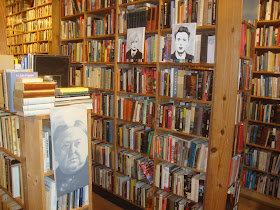 Lane Hagood is a bookworm. This was obvious when he won the Hunting Prize for a painting called Books I Have Possessed. Books have remained a subject for his work. And even when books are not directly referred to in his paintings, his work still feels bookish. It gives one the feeling of old libraries or cramped bookstores like Kaboom. 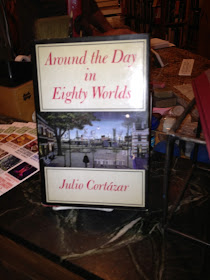 Kaboom is the kind of place where one might find an out-of-print book like Around the Day in Eighty Worlds by Julio Cortázar, and Lane Hagood is the kind of person who would pick it up. Julio Cortázar (1914-1984) was an Argentine writer who was one of the first writers of "el Boom," a flowering of writing in Latin America that reached across borders and languages in the 1960s and 70s. He's best known in the English speaking world for his short stories (his first book in English was Blow-Up: And Other Stories--the movie Blow-Up is loosely based on Cortázar's story) and his novel Hopscotch. Around the World in Eighty Days is an unusual book, a collection of short non-fiction pieces, reviews, essays, etc., that is considered somewhat autobiographical. I say "considered" because I've never read it. (The extent of my Cortázar is the Blow-Up collection.) One thing about it is that it is full of illustrations and collages, some by Cortázar and some chosen by him. These illustrations intrigued Hagood and inspired this exhibit, Cronopios. Hagood and his collaborator in this project, painter Seth Alverson, describe the genesis in this brief dialogue: 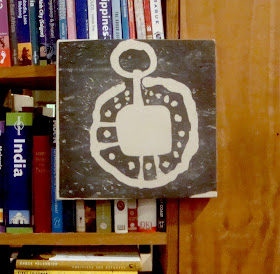 A "cronopio" is a type of character in Cortázar's stories of the 60s. In this exhibit, Hagood and Alverson claim to be cronopios. Cortázar described cronopios like so:


When cronopios will travel, the hotels are full, the trains have already left, it's raining buckets, and taxis do not want to take them or charge them high prices. The cronopios not discouraged because they firmly believe that these things happen to everyone, and at bedtime they say to each other: "The beautiful city, the beautiful city." And dream all night of the city's fantastic parties to which they have been invited. The next day they rise thrilled, and that's how cronopios travel. [from "Historias de Cronopios y de Famas" by Julio Cortázar, 1962, translated by Google with some help from me.]

A friend of mine recently wrote "One thing about no one reading anymore is I'm somehow more okay with people not reading anything than I was with people reading stuff that was wrong." That he shared this aphorism on Facebook is probably meaningful. It feels as if the age of reading books is ending. That gives this show an elegiac feel. In its content and its setting, it is a celebration of bookishness, a quality diminishing in the modern world. 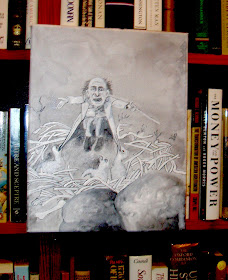 To see the paintings, one must mimic an activity of browsing in a bookstore. This activity is less adventurous than being a flâneur or walking in a Situationist dérive, but it's related to them. You wander the shelves--so expansive and maze-like at Kaboom--looking for the paintings, but also seeing the spines of innumerable books that you will never read. But, if you are a bookworm, you also know that you will eventually read some of them. 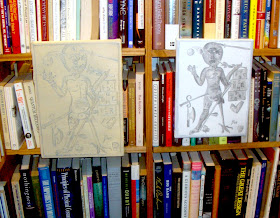 And sometimes you see where Hagood and Alverson have painted their own versions of the same image. Their choices are different for the most part, just as any two readers reading the same book have a different understanding of the book. This was something that Barthes theorized about, and which Borges discussed in a much pithier way. Given the number of potential readers for a number of potential books, meanings multiply explosively. A bookstore is a symbol for infinity. 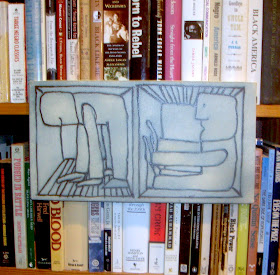 Bookstores are hangouts for anti-social nerds, for people who would rather read than live. This is what we bookworms sometimes believe about ourselves. But going to Kaboom affords us the chance to speak with someone who is a priest or shaman to our class--the bookstore owner. Kaboom is owned by John and Dee Dillman. They prepared a veritable feast for Cronopios, served out on the back patio of Kaboom. 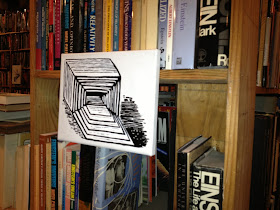 And John Dillman won't let me leave without telling me what he is reading and asking about what I am reading (biographies of Harold Ickes and Emma Hart, Lady Hamilton, respectively). He's the one who told me that Donald Barthelme was great but that his brothers are terrible. I don't totally agree, but as I looked at this show, I thought about Donald Barthelme. Like Cortázar, he favored the short story, and like Cortázar, he occasionally made texts sprinkled with his own illustrations and collages. 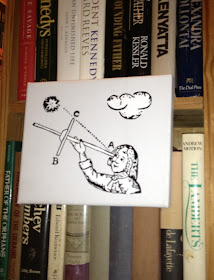 Dillman was inspired by Hagood and Alverson and Cortázar. So he drew the following image on the street in front of Kaboom. 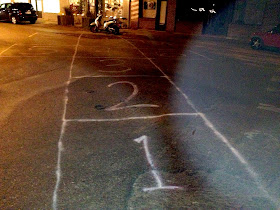 An enormous hopscotch court. A beautiful homage to the ultimate cronopio, Julio Cortázar.