Some Questions for James Drake

On January 12 Moody Gallery opens Group Exhibition of Gallery Artists, and it is unsurprising James Drake is part of the group. Surely, every time I visit Moody there are a few pieces by Drake displayed, and I’m having a memory of how parentally puffed up Betty Moody seemed on the opening night of Drake’s Station Museum exhibition.

According to Moody’s press release Drake will be showing works from his “Red Touch” series, so I contacted the artist to ask a few questions, and his replies clarified his choice of red for intensity, and the political reality underlying his series.

Virginia Billeaud Anderson: Your use of red pastel goes back for some years. Please comment on your attraction to it as an art medium. Are you drawn to its classic old-masterish quality?

James Drake: I started using the red pastel (chalk) about fourteen years ago while living in New York. I do not use much color, but felt an intense red was appropriate for this specific subject matter. While I love classic old master drawings these were not influenced by or based on that love and appreciation. I believe most of the “old masters” used more of a sienna color and I wanted these drawings to have an intense contemporary red. 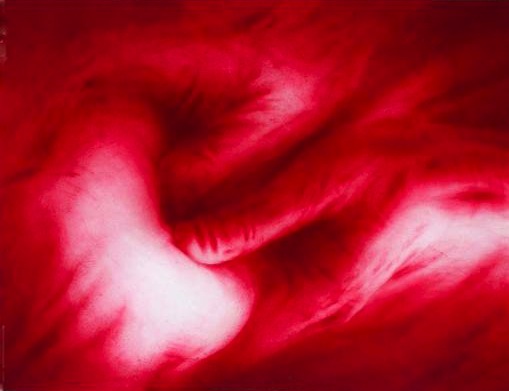 VBA: Your works on paper seem heavily influenced by Renaissance and Baroque drawings. Do you look to them for inspiration?

JD: Yes, I have a very real passion for Renaissance/Baroque drawings and always succumb to their beauty, sensitivity, and grace. And yes, they are a tremendous inspiration.

VBA: Why do you work in very large size?

JD: I work in a very large scale because when I draw on that scale it is necessary to use my entire body and is very physical. Up and down ladders, arms swinging, pacing back and forth - it is all a part of the process. Also, most people think of drawing at a scale of about an average sheet of paper measuring 20”x30”, however, these large drawings are meant as finished pieces and not sketches for paintings or other works. And of course, there is a certain drama inherent in large works that I try to convey to the viewer.

The Red Mirror is about 11 ft. x 21 ft and I have made many other drawings in that scale and some larger. For example my drawing City of Tells is 12 ft x 32 ft and I am currently working on a drawing that will be exhibited at the Museum of Contemporary Art, San Diego (formerly the La Jolla Museum) in June of 2014 that is 15 ft in height x 342 ft in length. It is a grid divided into ten sections which are in turn, composed 1266 drawings measuring 19”x 24.”

VBA: Do you begin with a preliminary sketch? Or, for a work as large as Red Mirror, do you project an image to guide your design?

JD: Yes, I usually make preliminary sketches and in the case of The Red Mirror, made about fifty or so. Sometimes I draw a very large figure or object on a separate piece of paper and then, move that drawing around on the final large paper to establish the composition and position of the figure or object. This gives me a sense of what the final drawing might look like and I can try different placements without drawing the figure each time. 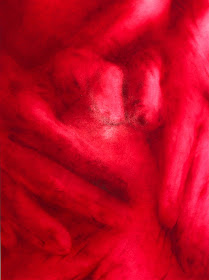 VBA: There seems to be psychic distance between the Red Touch images and the more clearly political Exit Juarez, or the Trophy Room installation, two unforgettable works I saw in 2010 the evening I met you at Station. Please comment on what seems like incongruence. Or, is there a link?

JD: Actually, the Red Touch series of drawings were based on and inspired by a body of work titled Tongue-Cut Sparrows which dealt with a prison language and political issues prevalent along the U.S. Mexican border. Briefly, Tongue-Cut Sparrows depicted women using an invented sign language to communicate with their loved ones in jail or prison. They were able to stand on the street, look at the men in jail and speak to them using this sign language. I made drawings, a book, prints, and a video of this truly unique phenomenon. This piece has been shown in many museums throughout Europe and the United States, including the 2007 Venice Biennale, curated by Rob Storr.

One of the frequent phrases the women repeatedly used while signing to their loved ones was “I want to feel and touch you.” Therefore, because they were denied physical contact I made the Red Touch series and used an intense red to convey that sense of passion. I was born in Lubbock, Texas, but spent my early childhood in Guatemala. All of my family lived in Guatemala at that time and I am convinced that a lot of the issues and works I have produced are a direct response to that experience.