When I was 10, I sucked at baseball. I needed glasses. I had a weak throwing arm, and my coach's treatment for my hyperactivity primarily involved doing push-ups and running laps around the outfield. I tried out for the select team and got cut. I joined a "regular" team, which guaranteed only that I could practice. Usually, I played 1 out of 7 innings if I was lucky. When I got to bat, my coach advised me on how best to stand to earn a walk. My teammates prayed I'd get hit.

In other words, I sucked; it sucked, and I quit...and that was a good thing.

In the Fun-Fair-Positive world we live in today, that doesn't happen. Some well-meaning losers have created a world in which children are sheltered from the harsh realities of failures. The kids still fail. Nevertheless, they get a trophy and recognition for their efforts. Everyone knows who won and who lost. But, if those that come up short want to engage in a little self deception, there's an entire industry in place to help them.

I greatly appreciate the art and curatorial work that Emily Sloan does. However, I worry that Sloan's Salon des Refusés has run its course. That it is in danger of becoming the Fun-Fair-Positive non-competitive competition for artists, where half-hearted artists go to hang their latest mediocro-piece.

The original Salon des Refusés in 1863 was a protest of the Paris Salon's very narrow definition of art. Being very French (after all they have L'Académie Française, which is a government body in charge of regulating the usage of the French language), the avant garde artists appealed to the Emperor Napoléon III for government sanction. He granted them the use of an annex to the regular salon. The rest is art history.

Lawndale's The Big Show 2013 is many things, but it is hardly monolithic. As our posts indicate, it is wildly divergent and appeals to diverse tastes and aesthetics. And it has been for the 20 years it's been in existence.

I attended part 2 of 4 of Sloan's Salon des Refusés. I saw many works that I liked such as these.... 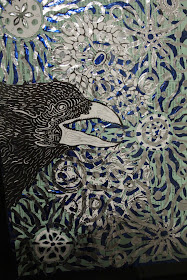 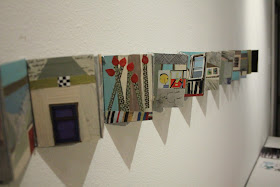 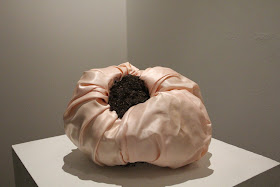 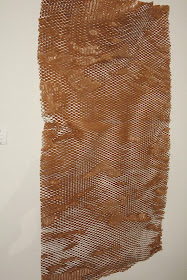 I also saw many that I didn't. I saw work that could have benefited from a second look, a reworking, a little tough love. Like the kind I got from my little league baseball coach. He pulled me aside, looked me in the eye, and said "son, I don't think baseball is your game. But this might be." Then he handed me a newspaper ad for a local track team. I've been running ever since.

Among Sloan's salon artists, I think there might be a writer or a musician or an actuarial accountant or two. And that's good thing.

The Salon des Refusés this year is a four-part exhibit at BlueORANGE. Part 3 opens this Friday, and part 4 opens August 9.