There is an article filed away in an old issue of Cabinet Magazine written by Josiah McElheny. In it he proposes the canonization of a movement born of a conversation between Isamu Noguchi and Buckminster Fuller called "Total Reflective Abstraction." As one can fairly easily conclude, the general premise of the movement is to engender a new form of abstraction based entirely off reflectivity. What’s less obvious, however, is the crux of the arguments Total Reflective Abstraction makes. While one may surmise the abstraction lies in the refraction of bouncing light and the bending of reflected images, the idea is actually that the abstraction exists in its invisibility. Devoid of edges, shadow, or content, the form is continually reflecting the environment back onto the viewer.

Soo Sunny Park’s Unwoven Light (2013), recently up at Rice Gallery, seems to reify this buried movement. It’s a massive installation comprising of thirty-seven welded and tied together chain-link fencing. Suspended mid-air, tufts of fencing twist and curl about, writhing like metal wind. The pores of the fencing are mostly filled with Plexiglas inserts, each lightly tinted with an acrylic film. The result is a wavy, tumultuous crystalline and prismatic structure that, in line with the tenets of Total Reflective Abstraction, harbors a sense of invisible presence. 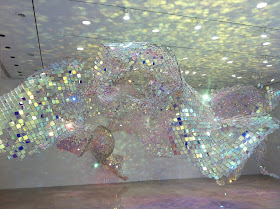 According to the brief film in the front of the gallery, Park engages herself primarily with interstitial spaces. And she certainly achieves that with Unwoven Light—the combination of chain-link fence to Plexiglas creates a form that feels simultaneously wistful and intimidating. Because of its reflective nature, it’s also a piece that constantly changes: the viewer can have an entirely different experience simply by attending to the piece at different stages in the day.

The write-up Rice Gallery provides details this potentiality of constant change not only due to reflection but also color. The slight tint Park applies to the Plexiglas squares shimmers, harkening to the iridescence present in nature on things like feathers, scales, wings, and water. But it curiously discusses very little, if at all, the presence of the object in the room and the ways in which it commands the space. While formally light and even playful, it pulls and leads and magnetizes the viewer’s movement like dark matter. As the viewer advances through the space, he gets sucked into and hugged by the piece as it curls in on itself, creating micro-spaces of refuge and claustrophobia within the totality of the environment.

In being that the most successful component of Unwoven Light is its invisible presence, it is disappointing to see that not every space of the fencing is filled with Plexiglas. This is likely due to Park’s interest in the chain-link fence as both a hefty and porous material, but the addition and uniformity of the Plexiglas within the pores of the fence is precisely and paradoxically what makes it feel so invisible in the first place. So here, the vacant spots read less as pores and more as missing teeth. Park and her assistants endured great pains, not to mention probably hundreds of hours welding fence and tying wire—which makes it all the more frustrating to see the separate components attached with plastic ties. While Park may be hard pressed to find a more practical form of attachment, the plastic ties are materially incompatible and nevertheless distracting. 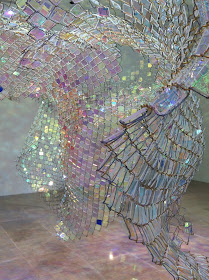 Soo Sunny Park’s installation is surprisingly forceful, commanding of movement while maintaining a visual pulchritude and weightlessness. In terms of liminality, it’s an environment that imminently hints at danger and entrapment, yet immanent in its ability to exude and reflect back onto the world color in its most beautiful form.