In its press release, Anya Tish Gallery describes Steve Murphy’s work as “immediate and striking.” No it’s not. His latest exhibition Awakened in Mid-Air peppers the space with the banalities of outdoor, public, modernist sculpture—simplified forms that comprise the backdrop of our lives as we walk along a sidewalk or drive to wherever it is we need to be. Yet Anya Tish has compacted and concentrated this group of work (much of which is either intended to be or could be displayed outside) in the gallery space for our consideration. So it begs the question: is there more to be gleaned here, or is Anya Tish simply providing a forum to broker to collectors’ houses and corporate courtyards?

The press release does, however, rightly depict Murphy’s tangential relationship to Minimalism. While the connections may seem obvious in his reductive, formalist pieces, within minutes of spending time in the gallery it becomes clear that reduction is really the only thing that aligns the two. While Minimalism’s theatricality relies on the bodily and spatial relationship between object and viewer, Murphy’s sculptures are self-referentially dramatic. Curvy and curiously whimsical, the work often bends in on itself, or seemingly emerges from the floor or appears to incisively cut into the wall. This in turn cuts the viewer’s corporeal relation to the work out of the picture. Instead, her eye becomes focused on formal aspects of the work like surface tension, precarious edges, and the relationship to its adjacent architecture. So it seems that, despite all its volume, Murphy’s formal preoccupations often lie more with two-dimensional concerns than three, which is kind of fascinating. 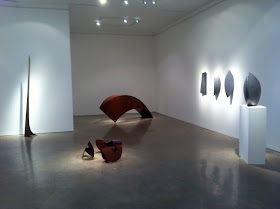 Just about all of the decisions Murphy has made tell a story that lines up quite nicely with his exhibition title. As large, columnar steel thrusts upward, cartoonishly curving like a fantastical road, and smaller sculptures are bracketed with piercing edges, everything in Awakened in Mid-Air suggests moments of danger and fantasy as one is wrenched into consciousness from sleep. What may be less obvious, although equally if not more important, is how Murphy has addressed the surfaces and how patinas, graphite, lead, and other sealants buttress or detract from that narrative.

For all the objects made of steel, Murphy has applied a reddish patina that gives the work the appearance of premature aging or rusting while also protecting the material, granting it an eternal (or at the very least a long-lasting) life span. It’s Not What You’re Looking at, But What You Think You See (2013) is one such sculpture. A rectangular steel block, It’s Not What You’re Looking at twists ever so slightly, peaking at the top as if the piece itself is yawning and stretching. While the structure may be waking up, the cloudy, maybe even smoky patina suggests a surface reminiscent of a dream. While Murphy’s intentions here are understandable—that he is using both material and surface to embody a state of being in-between—the patina reads as a faux finish, the kind that would likely show up in a suburban Italian restaurant. The surface tension isn’t problematic, however, because it is kitschy; it is distracting and disharmonious with the overall form, creating two simultaneous but disjunctive narratives that detract from rather than buttress each other. 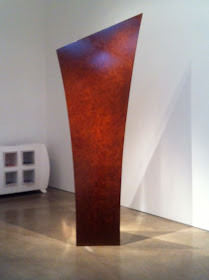 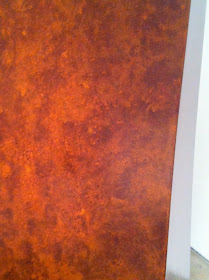 In Murphy’s case, the less he fiddles with the surface, the higher the payoff. About half of the work in Awakened in Mid-Air is made of wood he then covered with lead sheets. Your Enemy’s Tears (2013) is one of his smaller works—a rounded piece with a tip, a large, dense tear drop—resting on the pedestal in a carefully balanced way suggesting that with a tap, it would rock back and forth. Here the form and surface are married in such a manner that harmoniously engenders meaning. As light refracts off the lead surface, it creates subtly prismatic colors that feel ethereal. Instead of asserting control, Murphy simply lets the material do the talking, and it works. 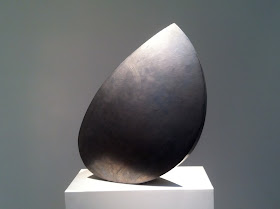 But perhaps the most successful surfaces are the ones that don’t cover anything up. Intrigued by the Promise (2014) is mounted in such a way that it appears to be emerging from the wall. Sharp and angular, it feels like a shape-shifting form squeezing through an invisible crack and is now frozen in place. As the viewer approaches the work and courses her eye along the flank, she can spot wooden rings popping out from under the grayish graphite coating. In this instance Murphy has not offered us any illusions: his palimpsestic surface treatment unveils the material underneath. By simultaneously concealing and revealing, he constructs an object that is convincingly both tangible and fantastical. This is important because here the surface treatment embodies, rather than illustrates, the liminality Murphy is truly after. 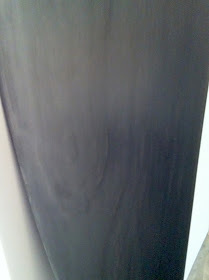 Yes, there is something about Awakened in Mid-Air that, at first glance, feels easily dismissible. Give it time. For all its hard, clunky materiality, there are moments that are also whimsical and eye-catching, where sculptures thoughtfully engage the architecture. And when Steve Murphy lets the surfaces speak, that’s when the work really sings.