It was jarring to walk into Sicardi’s downstairs gallery and immediately make sense of the pairing of two seemingly disparate artists: Miguel Ángel Rojas and John Sparagana. Largely conceptual, Rojas often makes work that either consists of or references material of an historically underrepresented social class. Sparagana, on the other hand, while perhaps his process may be unconventional, tends to make work that falls within the realm of conventional painting. So what brings these two together? Surely Sicardi didn’t simply pick a couple of names out of a hat. 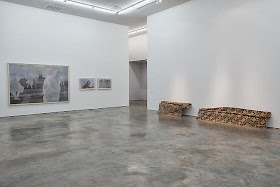 “El cuerpo sutil” translates in English to “the subtle body.” With that key bit of information the connections quickly start being made: both artists employ time-consuming and painstaking bodily energy to make their work, specifically with their hands. And since both seem to point to historical moments, the exhibition title probably also suggests the kind of body that constitutes a collective remembering. What happens when artists engage in that kind of tug-of-war, a murky battle of recalling, dismissing, and ultimately losing information that nevertheless remains engrained in our collective imagination? Laura Wellen in the brochure that accompanies the show suggests, at least in the case of these two artists, that a kind of empathy forms. “…Both propose a kind of empathy, something slightly unconscious, even physical.” What’s weird about this exhibit is that the artists’ treatment of the materials and even treatment of the subject matter is not only not subtle, it’s rather brutal and insensitive. So much so that it is enticing, although problematic because it is wholly unintentional. What is most offensive about El Cuerpo Sutil is that it isn’t intended to be offensive. 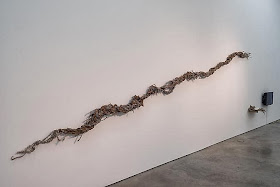 It isn’t entirely clear what exactly Rojas’ installation Por Pan (2003-2013) actually comprises of. The gallery’s material list intimates that the giant rope he has spun was made from the very grass he discovered within the walls amidst the destruction of a Spanish colonial house. Wellen calls it a braided rope that Rojas eventually painted silver, and Rojas’ artist statement claims it to be silver thread. After spending an extended period of time with the work, it appears as though Rojas is probably right. Formally and materially it is spindly, matted, and beautiful: thick, twisting spirals shooting off errant lines, splotched with muted reddish clay. But this homage—a rope that should what? rescue? provide an exit? repurpose itself back into architecture? is instead pinned to the wall, a two-dimensional installation robbed of its conceptual potential. It includes a video on a small flat screen in the lower right corner of Rojas creating the rope, washing himself in reddish clay in an effort to dye his skin the color of the indigenous peoples he is paying homage to (does anyone else find this at least slightly racist?), as well as an offering of banana leaves and corn flour in the lower center. Again, these three elements pinned to the wall neuters its materiality, telegraphing to the viewer how it may show up in her house, screaming to be commodified. And this homage to a low, disenfranchised social caste can be yours for only $70,000! Not that there’s anything wrong with selling work and making money, but the price and presentation seems awfully disingenuous and incongruent with Rojas’ message. 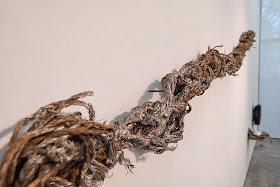 John Sparagana, on the other hand, makes work that ought to be flat. Most, if not all, his work for El Cuerpo Sutil comes from his Crowds & Powder series, where he generally took iconic images from magazines ranging anywhere from the Kennedys to protests in Cairo, rubbed them nearly incomprehensible with his fingers, enlarged and printed them several times, often painted over parts in oil color, cut them into tiny squares, and reassembled into large, hand-pixilated images. In the exhibition catalogue of said series, Benjamin Paul claims Sparagana’s intent reaches far beyond the traditional postmodernist notion of hand-pixilation. “…His method forms the basis of a subtle struggle with the dialectical role of images in mediating history” (Benjamin Paul. “Ghosts of History.” Crowds & Powder. Corbett vs. Dempsey. Chicago: 2013. p. 3). 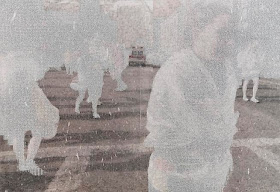 That key word again: subtle. How exactly is any of this subtle? Sparagana’s work may be ghostly and entrancing, the revelation of his process and effort mind boggling, but it isn’t subtle. In fact, Sparagana wants us to know, quite loudly and blantantly, that this is his revisionist take of historical moments, and that we should pay attention to him—which runs counter to Paul’s claim. It seems that Sparagana is less interested is meditating on how images mediate history and more interested in simply mediating history himself. And this raises some pretty interesting questions: what role does the artist have in inserting his hand into, mediating, and generally fucking with our collective remembering? What right does he have? After all, these are our images, our histories, and our traumas. 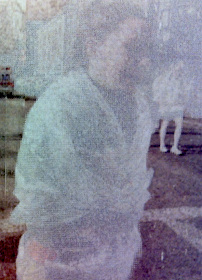 A particularly traumatic event Sparagana has taken on is the bombing at the Boston marathon. Crowds & Powder: The Street (2013) depicts a snapshot of the scene—terrified runners and onlookers clamoring for a safe place. Enlarged and hand-pixilated, all the victims have been whited out, centrally revealing an ambulance in the background. While it is certainly lush and disturbing, it begs the question: what exactly is the viewer supposed to take away from this? What fed Sparagana’s impulse to—lovingly, patiently, methodically—chop, mutilate, cover up, erase, and ultimately reify this horrific national moment? It’s this confounding narcissism that makes the work tick, that keeps it interesting. Every other read renders the work slick and sterile.

El Cuerpo Sutil cleverly and somewhat poignantly touches upon the artist’s and even gallery’s role in mediating collective remembering and advocating for and giving voice to impoverished classes. Unfortunately, that poignancy seems completely unintentional.