So for the past two nights I have been sick in bed with a nasty cold. That means I missed a bunch of art openings I wanted to see and I regret that. Next weekend will be a time for catching up. But being sick gives one time to read. I read slowly when I'm sick. My brain doesn't work at peak efficiency when I'm sneezing and coughing. That's why my preferred sick reading is unchallenging stuff--science fiction, old Marvel comics, etc. But not always. Sometimes I catch up on my art reading. During the day, I'll see some article online that looks interesting but don't have time read to right at that moment. I'll email it to myself for future reference. So since I was sick, I dug up a couple of those pieces in my "to read" folder.

I've been interested in "new casualism" since I first heard the term. The term was coined by Sharon Butler, and as I understood the term, it seemed like a description for some painting I was seeing around Houston by certain young artists like Dylan Roberts and Brandon Araujo and others. But the definition of "new casualism" was so broad that it was hard to say where its boundaries lay. 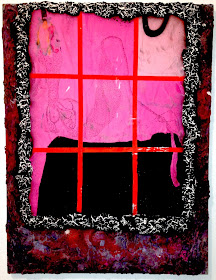 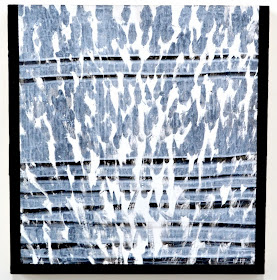 So I was hopeful when Sharon Butler returned to the subject in a new article, "The Casualist Tendency" published on her blog, Two Coats of Paint. Of casualist paintings (she has dropped the "new"), she writes:


There is more to the studied, passive-aggressive irresoluteness of these canvases – which often leave large sections unpainted – than meets the eye. They reflect a concern with imperfection, extending beyond traditional Bauhaus principles of good design to the unfinished, the off-kilter, the overtly offhand, the not-quite-right. And, to my mind, they refreshingly embrace almost anything that seems to lend itself to visual intrigue – including formal artistic failure.

But she acknowledges some of the criticism of this work, including the fact that "some old-school painters have branded the most obvious approaches ‘crapstraction.'" Casualist art is said to lack craft and attention to detail. It feels offhand, easy and like student work.

Butler defends it in part by pointing out that the same criticisms could be applied to many artists in the past (and have been). She refers, for example, to the older artists Rafeal Rubenstein wrote about in his article "Provisional Painting", as well as to the "bad painters" of the 90s (but not to the "bad painters" of the 70s) and even to Matisse. She refers to such painters as Elizabeth Murray (one of my all-time favorites) and Ree Morton who in the 1970s "countered the macho posturing of the minimalists by working from an intimate point of view that embraced messy everyday detail."

These all strengthen her case, but unlike the 70s when Elizabeth Murray seemed genuinely oppositional, I don't see an underlying reason for casualist painting to exist. You know how the modernist story goes: first this happened, and then this happened in opposition to the first thing, or building off the first thing, or building off some current in the culture at large--and repeat. That progressive meta-narrative of successive theories has collapsed under its own weight, but still the question remains--why does an artistic tendency like casualism exist? Butler doesn't try to answer that question in this short post, but I hope she's thinking about it because casualism is a real thing and worth thinking about.

But for casualism to survive as an idea, it needs to survive against criticism such as "Provisional Painting, Three Hypotheses" by Alan Pocaro published in Abstract Critical, a web magazine devoted to writing about abstract art. (One thing I love about the internet is that there can be online publications for every aspect of art, no matter how specific or obscure--abstract painting, for example, or art in Houston.)

In this short piece, Pocaro does what Sharon Butler doesn't do in either of her pieces on casualism. He offers up a theory of why it exists as an approach to abstract painting. In fact, he offers three theories, each from a different point of view. First is that "gifted writers" like Butler and Rubenstein have the ability to imagine something into being by virtue of their words. They can write eloquent praise of bad painting and be convincing. As a writer, I am perversely pleased by Pocaro's praise the power of words, but I don't quite believe it. Criticism--writing--seems to me to be at its weakest point in the history of art. This is born out empirically in Don Thompson's research in The $12 Million Stuffed Shark: The Curious Economics of Contemporary Art

. (Or maybe not; here I am writing about art writing.) Anyway, I don't think he completely believes it either.

Instead, I think Pocaro probably would give greater support to his second thesis. He wrote about students he taught who were very cool people but did bad art.


Much of it looked “casual, dashed-off, tentative, unfinished or self-cancelling” and it frequently displayed “a studied, passive-aggressive incompleteness” that didn’t just court failure, it was set to marry it.

While Raphael Rubenstein might have called this work “Provisional Painting” and Sharon Butler may have dubbed it “The New Casualism”, at the Art Academy, a few adjunct instructors and I had a different term for it: Poseur-Art. Far from “reassessing basic elements like color, composition, and balance, based on 1920s-vintage Bauhaus principles” these students probably never understood those concepts in the first place, nor did they care. Much of the work appeared “causal” and “dashed-off” because it was, often moments before a group critique.

The quotes he embeds into the first paragraph are from Rafael Rubenstein and Sharon Butler. He suggests that this conception of art students "posing" as artists has really gone pro. "Is it really such a leap to go from Duchamp’s art-as-intention, to art-as-attitude?" he asks.

This seems very old fuddy-duddy. But I'm an old fuddy-duddy myself, and sometimes when I look at a work like some in the recent Dylan Roberts show at Scott Charmin, I wonder if it's just lazy, deliberately dumb work (the Pocaro reaction ) or if there is something interesting happen that I am struggling to understand (closer to the Butler position). The fact that I have these conflicting thoughts is what keeps me involved with this work. Roberts is an artist I am keenly interested in.

Pocaro's third hypothesis is that this rebirth of abstract painting, along with attendant theories about it or attempts to place it within a new school, is simply nostalgia. Holland Cotter alluded to this in his article in the New York Times last month, "Lost in the Gallery-Industrial Complex." Holland's bitter piece was widely passed around via social media. He was mainly attacking the crazy world of the ultra-rich art trade--something fairly alien to most of the artists and even most of the gallerists I know. But we're in Houston, not the New York art world that Cotter inhabits.

The place of abstract painting as nostalgia was just an aside, but I recall being thunderstruck when I read it.


Roughly since the end of the multicultural, postmodern 1990s, we’ve watched new art being re-Modernized and domesticated, with painting the medium of choice, abstraction the mode of preference. Together they offer significant advantages. Paintings can be assembly-line produced but still carry the aura of being hand-touched. They can be tailored to small spaces, such as fair booths. Abstraction, especially if color is involved, can establish instant eye contact from afar. If, in addition, the work’s graphic impact translates well online, where stock can be moved eBay style, so much the better.

Pocaro isn't making this economic argument. His argument is that trying to invent movements in inherently a mistake.


This vaunted “re-birth” [of abstraction], hailed across the art-world, is merely another manifestation of the wider cultural nostalgia industry; a longing for the look, feel, and glories of the past in a backward-looking present thoroughly corrupted by indifference and cynicism. Since we cannot imagine what a future for abstraction might actually look like, a bevy of painters mine the past, adopting desiccated gestures as if there were meaningful aesthetic victories at stake. But there aren’t.

This sounds pretty much like Cotter so far. But then he adds:


There’s no reason to give up painting, but there are good reasons to stop making claims on its behalf. Disquisitions on “new developments” in abstract painting –or any kind for that matter- make for good copy, but they have the side effect of keeping last century’s spurious theories on life-support. The old arguments of modernism and post-modernism are worn-out, unproductive and irrelevant to the art of the 21st century. It’s time we set aside old habits and seek new avenues for production and new paradigms for discussion.

In a way this sounds like he's saying, "Stop writing down your thoughts about art." (A slightly weird stance for visual artist/art writer to take!) But I think he is misrepresenting Butler's reason for writing what she did. Butler is, like Pocaro, a painter herself. A painter who is also a prolific critic is not someone I'd ever call a poseur, whatever I thought of the quality of her work (about which I have no opinion because I've only ever seen reproductions online). As a painter, Butler writing about a tendency she has observed in painting strikes me as a way for her to understand her own practice within the artistic community in which she resides.

I wrote this to help myself understand a tendency in art that undeniably exists. This tendency needs greater explication (I completely disagree with Pocaro in this regard) and more criticism. In a sense, I want people like Butler and Pocaro to be in a dialogue, and by dialogue I mean a civilized, learned bare-knuckles brawl. This probably means people curating shows of this kind of work with the explicit intent of showing casualist paintings, followed by vigorous criticism that is unafraid to to attack the premises. I want to see a critical language to talk about this work evolve.