Hey, buckaroos, it's Hunting Prize time again, and they have uploaded photos of all the finalists to Facebook. In the past, Hunting has had controversy because of its prohibition of any art that anyone might possibly find offensive. A lesser controversy, but one that bubbles up most years, is that it seems to discriminate against abstract painting (although that complaint surely was silenced by last year's winner, Winston Lee Mascarenhas). But lending credence to this theory is that with this year's finalists, abstract paintings are vastly outnumbered by figurative paintings. That said, we don't know what the general pool of entrants was. Maybe this ratio of figurative to abstract among the finalists reflects what they received from artists entering the contest. Without more knowledge of the first round entrants and of the criteria by which they were judged, I am reluctant to say that the Hunting judges have a bias against abstract painting per se.

Below are a few pictures that caught my eye. Many of these works are by artists I already admire a lot, but the pieces that intrigue me most are the ones by people I've never heard of or are, at best, only slightly familiar with. I love coming across work like that, which is why I like open-call events like the Hunting Prize and the Big Show. 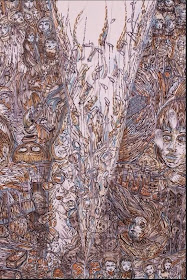 I haven't seen that many Fernando Ramirez pieces, but I have liked all the ones I have seen. They have a fearful edge that reminds me a bit of artists as diverse as Vince Locke and Brian Chippendale. But will the Hunting judges go for art that looks like it could serve as the cover of a death metal album? I doubt it, but who knows? 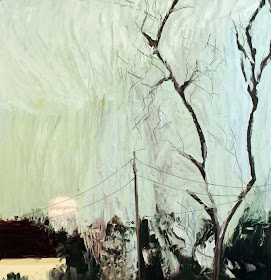 I was completely unfamiliar with Gina Gwen Palacios, but I liked the way the bleak landscape Abel's Lot collapses in the middle. It suggests sudden violence in a small town, like in a novel by Jim Thompson or Cormac McCarthy. 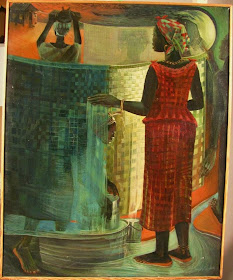 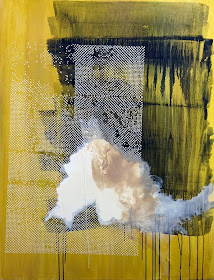 I was surprised to learn that this drippy painterly abstraction is by Heather Bause, whose previous work has been pretty hard-edge in my experience.But looking at her recent work on her website shows that this is a direction she's moved into, and I have to say I like it a lot. 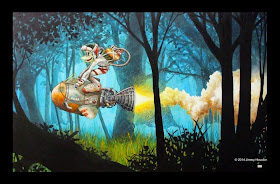 Every now and then I will see a piece by Jimmy Houston in a group show or during Art Crawl. But his work is generally not the kind of work you see in local galleries--illustrational, cartoony, "low brow," etc. But I like his work quite a bit and this particular Disney-crossed-with-steampunk image tickled me. Sure it's illustrational--and I like good illustrations. 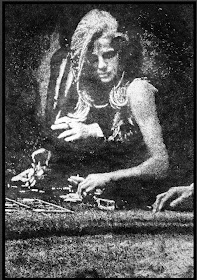 This is an unusual Laura Lark piece. If done using her typical stipple technique, it must have been rather tedious to create--it's so dark and dense.  I can't tell if it's a collage or if she just drew the male hand projecting from the woman's chest, but that combined with the darkness of the image and the bad surveillance photo quality give Arena a slightly sinister feeling. 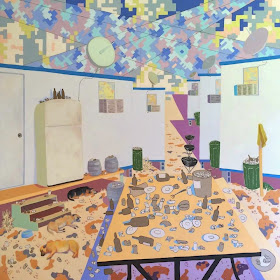 I loved Lindy Chambers' use of bold flat colors with clean outlines in Party Animals--it's like a cross between Patrick Caulfield and Hergé. She recently had a show at d.m. allison, which I liked but which also seemed a little heavy on the surreal/pop elements. By eschewing that stuff, this painting is much stronger. It's my favorite of all the finalists for the Hunting. 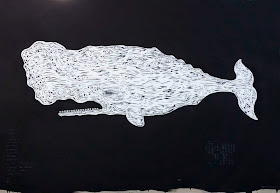 I have a silk-screen of three sperm whales by Matt Messinger printed on ledger paper from Dean's Easy Credit (which Messinger presumably acquired from Jim Pirtle). In my print, the whales are the usual black variety, but in this painting he goes for a singular white whale, perhaps a descendent from Moby Dick himself. 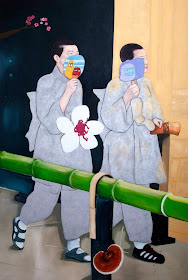 I'm not sure what it is about these two monks (?) and their fans that appeals to me. It seems quite a bit different than the work I saw in Mira Hnatyshyn's studio in San Antonio a few years back.  Her work generally reminds me a bit of Larry Rivers--but not this elegant piece. 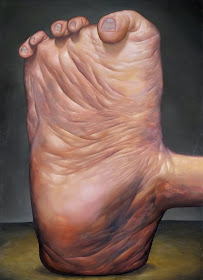 This is the kind of grotesque work we've come to expect from Seth Alverson. But I also wonder if it's an homage to the foot paintings of his friend (and previous Hunting Prize winner) Lane Hagood. Whatever its inspiration, it's one damn ugly thing. I can't turn away. I love it. (I should disclose that I own a painting by Alverson.) 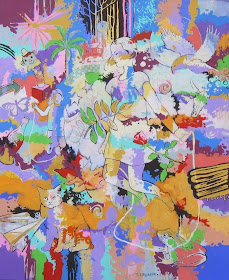 A few years ago, I saw a painting by Terry Crump at the Big Show at Lawndale that I really liked. With his splashy, non-local pastel colors, his work feels like the lite-beer version of Matisse. I guess that at best sounds like I'm damning it with faint praise, but I like Savannah Bridge a lot. It's pretty, and while sometimes I love ugly (as mentioned above), pretty's OK with me, too. "Do I contradict myself? Very well then I contradict myself, (I am large, I contain multitudes.)"

There's much more. Check out Hunting's Facebook page to see them all.
Robert Boyd at 5:30 AM
Share